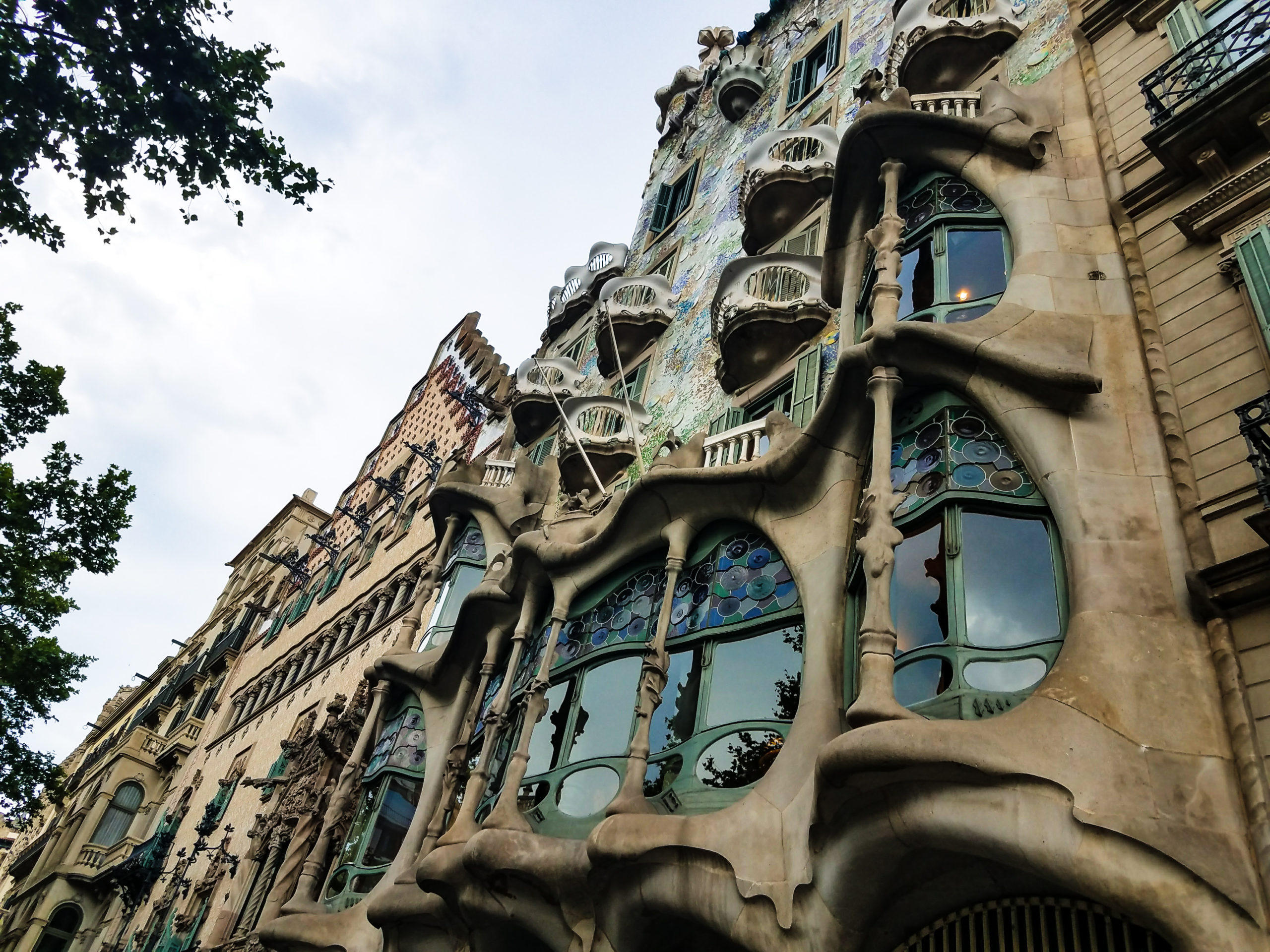 The delicate interaction between nature and embellished architecture is particularly enthralling to me, and often is the subject of some of my favorite photography I’ve taken. Not to mention, it’s a big part about what makes destinations seem beautiful or opulent in my eyes. The absence of which leaves places feeling lifeless, which is one of the biggest critiques of Modern buildings that characterize depressing apartments and uninspiring office spaces.

I soak in a lot of physical details from my surroundings when I travel, domestic or otherwise. Try as I might to zero in to a docent giving their spiel about the particular history of any given beautiful place or monument, my mind wanders pretty helplessly and all my senses tend to heighten. Sight, sound, touch, smell, taste.

Given how I tend to experience places, with my senses first, I became particularly enamored with the work of Antoni Gaudí while I was in Barcelona. Some of his whimsical creations, expert use of color and avoidance of straight lines in his most experimental designs have stuck with me this long, inspired some of my own art and helped me to rethink everything I’d previously considered to be “beautiful”. I’ve been meaning to write about this experience since I saw it firsthand. And although several years have lapsed, the memories are as fresh as ever thanks to the marvel of mobile phone photography!

Lilly and I have had the topic of ugly architecture come up more than several times in our recent discussions. Naturally, after a year spent cooped up indoors thanks to a year-long quarantine that engulfed 2020, ruining any of our post-grad travel plans we could have made, we found ourselves working from home for our respective companies in particularly drab environments. In our case we happened to be entombed alive inside of old, dark apartment complexes that steadily and surely drove us both nuts.

Maybe I’ve been conditioned by frequenting museums with large roped off sections and “no photography” signs that I was caught off guard when the voice on my self-guided tour tape in the Casa Batlló encouraged me to reach out and touch the building. Curved, cascading railings, twisted doorknobs and colorful mosaics, the Gaudí 1904 redesign of the house was created to be interacted with, lived in.

A 2014 video released by the Casa Batlló’s Youtube channel depicts a woman (in the greatest early 2010s fashion I’ve ever seen – with a red mini dress, daytime smokey eye and foundation-colored nude lip look – oh, the nostalgia!) her hands lingering on the smooth curvature of the home as it comes to life. Without the least bit of sarcasm, it was a legit cinematic piece, perfectly encapsulating what it feels like to experience the inside of the whimsical building.

Rounded, colorful, stained glass windows, sculpted stone structures, and mosaic adornment, especially on the arched roof of the building, meant to resemble the scales of a dragon give the home a dreamlike appearance. Oh, and if you’re able to see it, part of this rooftop structure is lined with tortoise/turtle shell shapes. These are a common element Gaudí would include to represent the land and the sea.

“As such, Antoni Gaudí found the essence and the meaning of architecture by following the very patterns of nature and by always respecting its laws. He did not copy it, but rather traced its course through a process of cooperation, and in that context he created the most beautiful, sustainable and effective work possible through his architecture. Gaudí himself once said: ‘originality consists of going back to the origins’.”

In many ways, the influence of nature in Gaudí’s Casa Batlló represents the opposite of the Modern architecture movement in which form and functionality dominate the design of a lot of contemporary spaces that we’re accustomed to seeing.

Some of the biographies surrounding Gaudí’s early life detail his rather sickly childhood in which he spent a lot of time indoors – I cannot help but see the parallel to our own lives last year in quarantine. Why else would we be on Instagram Messenger ranting about how much we hate buildings? I imagine Gaudí, trapped indoors like we were, more or less, and it’s easy to see why I’ve been daydreaming about returning to Barcelona and stepping foot on the Batlló dragon-shaped, mosaic rooftop again, this time with my daughter in tow… to see anything except the rigid lines of tract homes in our polluted hometown. To put it more succinctly, I’m bored.

Although I didn’t get the opportunity to explore the inside of it in my super short visit to Spain, I still caught glimpses of Gaudí’s still-unfinished Sagrada Familia Basilica while galavanting throughout the city! This was his real life’s work and his legacy and the more I’ve learned since leaving the city is only giving me more incentive to travel back… perhaps when the Basilica is complete? I’m already arranging a detailed travel itinerary in my head for Ellis and I.

Antoni Gaudí began working on the Sagrada Familia in 1883. He lived in his workshop onsite and continued his work on the building until his death in 1926. That’s 46 years he devoted to this already gorgeous masterpiece of a building, unfinished or not!

Gaudí was killed in 1926 after being struck by a passing trolley outside the church. Despite being one of the most famous and notable figures in Spain, he died a pauper’s death as no passerbys suspected him to be the famous architect especially since he was not carrying identification papers. The priest at the Sagrada Familia later identified his body as that of the architectural mastermind Antoni Gaudí. He is currently buried in a tomb within the church.

I haven’t seen the inside of the church myself but what I’ve read about it’s design makes its sound beyond glorious.

“Gaudí felt that things should be built to resemble nature. Gaudí would hang a weighted string from the ceiling to see how natural arches would form, and designed La Sagrada Familia’s interior based on [this]. The interior pillars actually resemble trees, and when you look up at them their shapes constantly change, as real trees appear to do.”

Construction on the Sagrada Familia is set to be completed in 2026, 100 years after Gaudí’s death.