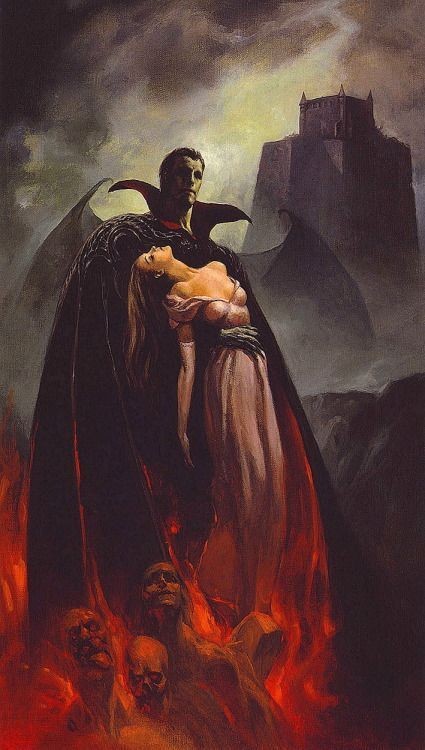 Sexy Ghouls: How Repulsion & Intrigue form a Backdrop for Ghastly Romance in Literature

Lilly’s most recent piece about Mary Shelley’s Frankenstein presented some exquisite remarks about life, death, fear and abandonment. She summarizes the plot of this gothic thriller in a way that justifiably casts Victor in a villainous light or as Lilly describes it “-a monster by soul”, having cruelly rejected his own creation, monstrous in his eyes, orphaning the creature.

However, this all made me think about the idea of reanimated corpses and other monsters in some of my most beloved literature. Ghosts, demons, phantoms, and of course vampires, who instead of being met solely with repulsion and horror, as Victor Frankenstein regarded his creature with, were on the receiving end of intrigue and even adoration, at least briefly.

A common canonical rule in horror, or if you’re incredibly spiritual & superstitious, is that a monster must be invited in to cause any real damage to you. In classic literature and occult media, vampires must be invited to cross the threshold of a home and demons must be given permission to enter an object or take possession of body. In much the same way, Victor invited his monster into existence by creating him in the first place. And this is first and foremost how horror begins to befall our rather dim-witted main characters.

Washington Irving’s haunting short story “The Adventure of the German Student” originally published in Tales of a Traveller depicts a young Gottfried Wolfgang, a lonely, overworked German student studying in Paris at the height of the French Revolution. His fragile psychological state seems to make him susceptible to dark influence as he begins to have vivid dreams of a beautiful woman night after night. One stormy evening, Wolfgang sees a woman, distraught, sitting alone on the scaffolding of the guillotine that’s still fresh with the blood of the public executions that took place that same day. Wolfgang approaches the woman and asks if she has any friends or family to return to, assuming her to be mourning the death of a recently departed loved one. When she exclaims that she has no friend on earth, Wolfgang takes pity on her and invites her back to his hotel to escape the rain. As a flash of lightning illuminates her face in the darkness, he realizes this is the same woman who has captivated his dreams. Taken with her, he asks her to be his wife.

“I pledge myself to you for ever.”
“For ever?” said the stranger, solemnly.
“For ever!” repeated Wolfgang.

The next morning after Wolfgang returns from hunting down a more spacious home for himself and his bride, he finds the woman cold and corpse-like in his bed. He calls for help and as the authorities arrive, they implore Gottfried to tell them how the woman got there. After the young man asks how they know of the woman, they exclaim she was executed by guillotine the day before just seconds before her necklace is removed and her head rolls onto the floor.

Wolfgang then comes to the conclusion that a demon had reanimated the corpse to gain possession of him which inevitably drives him mad and leads to his death.

In Stephanie Meyer’s Twlilight, teenage Bella Swan is so entranced by a vampire boy at her new school that she decides to ignore his many warnings about quite literally being a threat to her life (don’t worry, I can change him) and proceeds to pursue a tumultuous romance with the icy killer. She invites herself into an underworld of undead beings that had been hiding in plain sight and proceeds to promise herself forever to her corpse husband just as Gottfried Wolfgang had done.

“‘Of what a strange nature is knowledge! It clings to the mind, when it has once seized on it, like a lichen on the rock. I wished sometimes to shake off all thought and feeling; but I learned that there was but one means to overcome the sensation of pain, and that was death – a state which I feared yet did not understand’,” (Shelley, 108).

Frankenstein’s monster endures insufferable pain that mimics the wretched exclamation we might have heard before: “Well, I didn’t ask to be born!” Ultimately, the creature comes to realize that the only way to end the agony of living life as a monstrosity is through death, which he is apprehensive about.

This theme of misery is unsurprisingly used often by authors describing the psychological state of their fictitious monsters. Typically the monsters express pain at their outcasted existence, whether their mortality has been unnaturally extended or not. The desire to cease thinking and knowing, which prolongs their suffering, is potent in these plotlines.

In Meyer’s Midnight Sun (2020), the author portrays the vampy main character as a self-loathing immortal, a walking abomination, and already damned as far as he is concerned about the state of his own soul. He’s repulsed by his own nature and struggles to maintain control of his wicked impulses at all. Throughout the novels, he mentions explicit plans on how he would take his own life if his girlfriend were to die, since his existence as a monster is otherwise meaningless and excruciating. Typical emo boy.

In The Phantom of the Opera by Gaston Leroux, Erik, the Opera house’s frightful and seemingly ghostly entity has doomed himself to a life of solitude and haunt as he believes himself to be far too grotesque-looking to assimilate into normal society. His monstrous appearance and excessive loneliness drive him to commit unthinkable acts of terror when he is not given his way. A temperamental and ostentatious character, the masked villian preys on Christine, a young singer, and convinces her that he is her “Angel of Music” sent to her from her beloved deceased father. Erik forbids her from marrying and attempts to abduct her to be his bride… reminiscent of Persephone & Hades, minus the implicit Stockholm Syndrome.

Once again, through this story, we see the desperation of the monster in attempting to find meaning and solace through love, even if that romance is coerced from the victim, in order to make their existence bearable at the least. This was exactly the thing which Victor Frankenstein denied his creation, leading to the monster attaching his purpose to inflict horror on his creator – hate, instead of love, giving him his incentive to continue living in spite of Victor.

Common Throughlines: Who falls in love with a Monster?

The friendless German student, the rather unremarkable teenage girl, and the orphaned songstress each fell victim, at least initially, to the wicked intrigue of their respective monsters. Why? Perhaps that they themselves were rendered desperate in their own search for meaning and purpose.

When pitted against the paranormal, these mortal subjects feel their own existence is feeble, meandering, and pointless. Then, in an all too human attempt to achieve some sense of immortality and resist the erasure of their existence to impending oblivion, they begin to fixate on fame, notoriety, marriage, or more blatantly, an eternally extended life for themselves as a form of irrational self-preservation, if you will.

The dichotomy here exists in that the monsters struggle with their cursed lives so much so that they yearn for the end of their existence to shake off their feelings of misery; and their human counterparts instead wrestle with the limitations of their humanity to the point where they align themselves with ghoulish fiends, even sacrificing their souls in the process, to gain immortality.

These stories, contrasted with Shelley’s Frankenstein, present a different kind of scary story, one that makes us fearful of monsters hidden in plain sight, of one another, and ultimately, ourselves… lest we too be seduced by dark entities and impulses that prey on our vulnerabilities.